Playing For James White, Patriots Run All Over Raiders In Week 3 Win 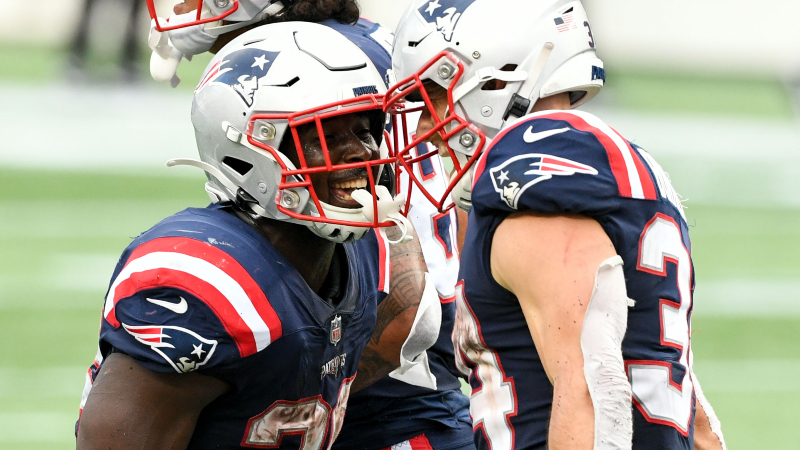 FOXBORO, Mass. — James White did not suit up for the New England Patriots on Sunday, but his presence was clearly felt inside Gillette Stadium.

After the Patriots dispatched the Las Vegas Raiders 36-20 to improve to 2-1 on the season, multiple players dedicated the win to White, who has been away from the team since his father, Tyrone, died in a car crash last Sunday.

Running back Rex Burkhead teared up when asked about White during his postgame video conference.

“It really is tough,” Burkhead said. “A lot of us, we think about him every single day and his situation. He’s just an unbelievable person, player and leader of this team. Him being away, and of course the situation him and his family are going through, it’s sad. We just tried to go out there and tried to play for him. …

The Patriots held a moment of silent reflection in honor of Tyrone White before kickoff. White’s mother, Lisa, also was involved in the crash and was in critical condition as of this past Tuesday.

James White has not taken the field since the crash, sitting out the Patriots’ last two games and last three practices. Sony Michel said he remained in close contact with his fellow back throughout the week.

“We’re always thinking about him,” Michel said. “Especially, I can speak for myself, just thinking about him a lot, texting him, making sure he’s good, staying high, high spirits. The rest of the backs, I believe, did the same thing, and we all came together and just played hard.

“That’s what James White does. He doesn’t complain. He goes to work every day. He’s one of those guys that I’m sure you hear him being talked up all the time, but it’s who he is.”

Wide receiver Julian Edelman said the desire to play and win for White — a team captain and one of the Patriots’ most respected players — was a “huge motivating factor” for New England.

“It did give us a motivation to go out there and play for him,” Edelman said. “Because you know for a fact, with the kind of guy James White is, if something like that happened to one of us, he would do the same thing.”

The Patriots’ running backs struggled in their first game without White, averaging just 1.4 yards per carry in last week’s loss to the Seattle Seahawks. They excelled Sunday.

Playing behind a reshuffled offensive line, New England racked up 250 yards on the ground — its highest total since Week 16 of the 2018 season — despite a pedestrian rushing effort by quarterback Cam Newton, who gained 21 of his 27 rushing yards on one fourth-quarter scramble.

Burkhead scored three of the Patriots’ four touchdowns, tallied a team-high seven catches and finished with 98 yards from scrimmage (49 rushing, 49 receiving) in one of the most productive outings of his NFL career.

Michel, who was held to 19 yards on seven carries against Seattle, broke out for 117 yards on nine totes, including back-to-back big plays that went for 38 and 48 yards. It was the second-highest regular-season yardage total of his Patriots tenure.

“We fed off each other,” Burkhead said. “It always helps us out. We love competing, but we root for one another when we’re out there making plays.”

It was the Patriots’ second 200-yard rushing performance of the young season. They tallied 217 in their Week 1 win over the Miami Dolphins.