A recent move by the Federal Reserve means that borrowing rates for households and businesses will likely remain extremely low for years to come.


The Federal Reserve announced last week it would keep interest rates near zero even after inflation has exceeded its 2% target level, a significant change in how it manages interest rates and one that is expected to make getting a loan for a home, car or home repair inexpensive for at least the next four years.

The number one roadblock to an economic recovery is the pandemic, said Bill Adams, senior vice president and senior economist for The PNC Financial Services Group.

“To return the economy to full health, we’ll have to bring the pandemic under control, but the Fed’s interest rate cuts and low interest rate policies are helping support consumer demand, helping the housing market and other parts of the economy where interest rates have a large impact on the pace of growth,” Adams said.

The Federal Reserve’s cut is spilling over to lower interest rates for all types of credit for businesses, consumers and home buyers.

”Having lower interest rates means consumers are more inclined to go out and get a loan to buy a car or it’s easier to finance a mortgage to buy a home,” Adams said.

Jeff Reichard, founder of Reichard Buick GMC in Dayton and Reichard Chevrolet in Brookville, said the decision by the Federal Reserve means “a lot” because the lower interest rates and the Fed keeping them lower helps people keep their payments down.

“It’s why we’re so busy right now is because it’s a great time to buy a car because interest rates are so low,” said Reichard, who has been in the vehicle sales business for 44 years.

A ramp up in business started in May, two months after the start of the pandemic, and every month since then the dealership has bested totals year over year, he said.

“We’re going to smoke last year’s August this month,” Reichard said Tuesday. “I mean, it’s not even close. We’re talking, like, 30 percent ahead of last year.”

Consumers are able to purchase “more vehicle” as a result of lower interest rates, said Jenell Ross, president of Bob Ross Auto Group in Centerville and chair of the Cincinnati branch of the Federal Reserve Bank of Cleveland.

“The biggest problem right now is dealers having inventory due to the plant shutdowns from earlier in the spring,” Ross said. “We do not have normal levels of inventory on the ground right now.”

Weathering the storm: Can Dayton’s arts community survive the pandemic?

The Wall Street Journal recently reported that used-car stockpiles at dealerships faded to just under 2.2 million vehicles by late July, a roughly 22 percent decrease from July 2019, according to research firm Cox Automotive.

The Dayton Daily News and Cox Automotive are owned by Cox Enterprises.

Lower interest rates can help people struggling with unemployment or reduced employment overcome uncertainty by allowing them to provide themselves with transportation, Ross said.

“More and more people are looking for their own personal transportation due to the pandemic,” she said. “A lot of people are changing their ride-share driving habits.”

For home loans, lower interest rates represent great opportunity because “the lower the rates … the (greater) the home people can afford for the same income,” according to Sham Reddy, 2020 Dayton Realtors president and a realtor since 1992.

“People will qualify for a bigger home for the same income, which means there will be competition for the larger homes,” Reddy said. “That means inventory will continue to be low and the prices (will) continue to climb unless by some miraculous way we get 100 or 200 homes on the market in one day. That’s not going to happen.”

CORONAVIRUS: Parents may be eligible for federal funds

Near rock-bottom interest rates aren’t good for everyone, Adams said.

“Lower interest rates help borrowers (but) they make investment decisions more challenging for savers,” he said. “The Fed interest rate cuts have meant the income that savers can expect to see on very low-risk investments has been sharply curbed by this policy.”

Interests rates for savers are down from where they were in 2018 when the economy was much stronger, Adams said. The Federal Funds Rate peaked in the last cycle at 2.4 percent between December 2018 and July 2019 and it now sits at 0.1 percent, he said.

“Low interest rates mean that for investors looking for a return will either have to invest in riskier asset classes or invest in longer maturity bonds than they would have a year or two years ago to generate the same yield on their investment,” Adams said.

The renewed emphasis on low rates to support the economy comes at a perilous time. Unemployment is still in double digits, and roughly 1 million people are applying for jobless aid each week even as the amount of aid they receive has shrunk. Consumer confidence has tumbled.

“The formal adoption (of the new policy framework), along with Powell’s still cautious economic outlook, underscore that the Fed will keep rates near zero for a long time,” said Kathy Bostjancic, chief U.S. financial economist at Oxford Economics.

She said she continued to believe the Fed would not begin raising rates until 2024.

The Associated Press contributed to this report

Sat Sep 12 , 2020
In 2019, Jane Fonda decided to temporarily move to Washington, D.C., to protest climate change by launching Fire Drill Fridays. That’s where the Oscar-winning actress starts her new book, “What Can I Do?: My Path From Climate Despair to Action,” about activism on the issue of climate change. Recently praised […] 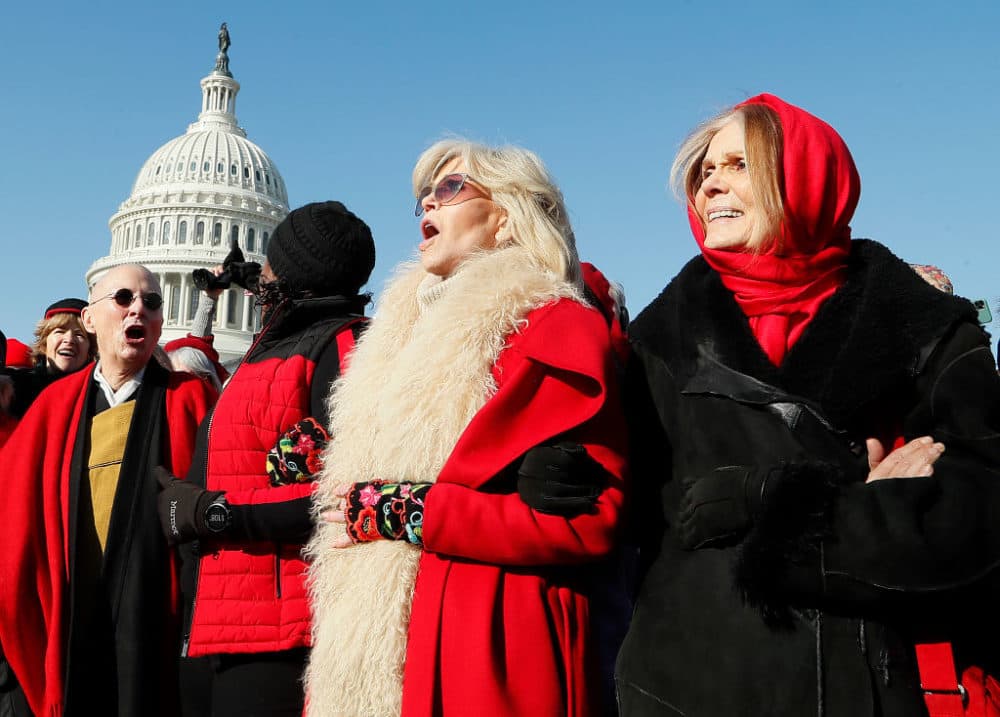