Fuel reduction is possible in an AV world 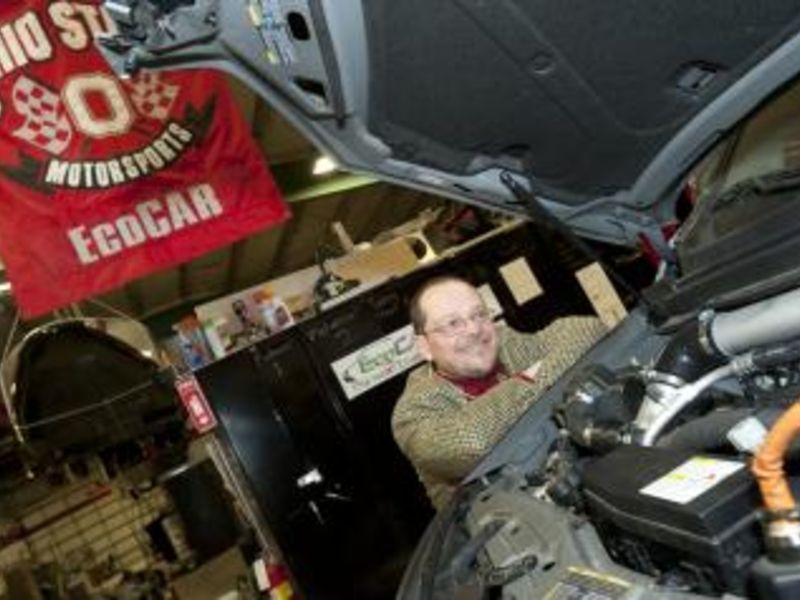 Rizzoni and his team achieved a major step toward such an ecosystem with their NextCar project, assigned and funded by a division of the U.S. Department of Energy.

The team entered the project with the high-risk, high potential goals of improving next-generation automated functions in passenger and commercial vehicles—and perhaps more importantly—improving a vehicle’s fuel economy by at least 20 percent.

“With knowledge of the navigation systems, with speed constraints and routes, with the addition of vehicle-to-vehicle and vehicle-to-infrastructure communications, is it possible to minimize fuel consumption, all while using this information to control the power train?” Rizzoni inquired.

To achieve validation on their ambitious project, they developed models, then constructed a virtual world—not just the vehicle, but an entire virtual world with roads and varying degrees of traffic lights and congestion.

The team wrote algorithms to achieve the best possible outcomes in the ether, then matched these optimized outcomes with thousands of simulations of their models.

They drove around the streets of Columbus—mostly routes 15 and 19, for their varying degrees of stops and starts—collecting data through a port and a Bluetooth interface, and they applied this data using more original algorithms to the models.

“We developed all the mathematical equations to predict real world data,” Rizzoni said. “We created signal phasing timing and sequences that allowed us to work with open street data. Then we introduced probability and variations and randomized the behavior. Both the predicted conclusions and real world discoveries were very similar.”

And the team did, in fact, validate their hypothesis, achieving an average 23 percent fuel savings (over an established baseline at a comparable travel time) on the high-speed test track at the Transportation Research Center in Columbus—and approximately the same results on the streets of Columbus.

“In summary, you can achieve as good or better than the original 20 percent fuel gains as proposed in the NextCar program,” Rizzoni said. “In fact, the trip time penalty is zero or negative, as we actually found we can arrive at our destination faster while consuming less fuel with this optimization.”

A brief history of automation

Ninety percent of transportation around the world is powered by petroleum, and the only sector that converts more is energy generation.

Of the main sources of energy, petroleum remains king, with natural gas consumption surpassing coal for second place. Nuclear, biomass and wind energy follow, according to statistics from the Lawrence Livermore National Laboratory.

All of this, Rizzoni said, means that the evolution of automated functions in passenger vehicles is critical to the environment and the pocketbook.

“I contend that automation in vehicles is a topic that goes back 40 years with the introduction of early anti-lock braking and traction control systems, which were all about enhancing safety,” he said.

These early automations gave way to second generation technologies such as driver warning systems and comfort functions, as well as adaptive cruise control.

“Today this continues to increase,” Rizzoni said. “There are numerous examples in production, low- and high-speed automated maneuvering with collision mitigation. We are moving forward and beginning to see glimpses of level 3 automotive functions.”

The team would soon scratch the surface of level 3 automation with NextCar, using the most state-of-the-art drive train, power sources and software to achieve optimal fuel efficiency.

From the virtual to the real world

Rizzoni said he and his team needed to develop a working model vehicle that had speed-tracking control, allowing it to respond to optimum velocity; and have the capability to achieve as little fuel consumption as possible along prescribed routes.

The propulsion system needed to have several degrees of freedom to run as an aggressive, normal or passive driver might drive, and the engine was to be equipped with a dynamic “skip fire” system, which fires only the number of cylinders that are required to maintain a certain speed.

In addition, the ultimate vehicle was to have an electric motor that assisted with the torque and recovery used in braking.

“We needed the model first, then the physical,” Rizzoni said. “We had predicted fuel consumption with reasonable accuracy, and both followed same upward curve. But one of the main challenges was creating a virtual environment that demonstrated that indeed the potential was there to achieve such fuel economy.”

A twenty percent reduction in fuel consumption was the goal, but it clearly was not going to be simple.

Rizzoni and his team designed the virtual environment with various “tunable” constants, among those being a mode for operations on the freeway; car following mode; the absence of traffic; and stop mode.

The model was later extended to include line-of-sight capabilities and a rolling horizon, or the ability to preview information that is coming and then create an optimal solution for this finite horizon.

And everything—from the street lights to the other vehicles—needed to talk to each other, at least for optimum model conclusions if not real-world results.

“Suffice it to say, we quite successfully implemented these algorithms so as to be able to do a short term optimization, reducing (software) run time to a fraction so we were able to stay ahead of the game with the rolling horizon,” Rizzoni said. “There clearly was an inherent trade-off between time traveled and fuel consumed.”

Rizzoni and his team soon realized that the key to reducing fuel consumption, and ultimately time traveled and energy used, is the ability to save kinetic energy.

Could the vehicle be so intelligent that it will actually find all the green lights? Perhaps not, Rizzoni said, but the likelihood of having to stop the vehicle can be reduced.

“The real optimizer is trying to eliminate loss of kinetic energy in the vehicle,” he said. “Delphi created a state-of-the-art production-level speed controller to assist with this. Knowing what is coming, we can be more aggressive in our efficiencies, using the engine without feeling the need to recharge the battery and those sorts of things.”

The team then applied the algorithms developed in the virtual world to the Volkswagon Jetta, and took to the test track—and finally to the city streets with the smart car.

One Columbus route had few traffic lights with a smoother relative average speed, and the other had more lights with inconsistent speed.

The routes were driven aggressively, normally and passively, using all the smart technology implemented in the vehicle and measuring variable speeds, battery consumed, fuel consumed and travel time.

And in every case, fuel consumption was better than a non-optimized vehicle.

Rizzoni said the program will be extended in 2021 to include level 3 through 5 automation—a truly autonomous vehicle that can be driven hands-free—even human-free.

“There is a lot that can be done with connectivity,” he said.

The virtual 39th Annual Conference on Tire Science and Technology continues through Oct. 2 at tiresociety.org.