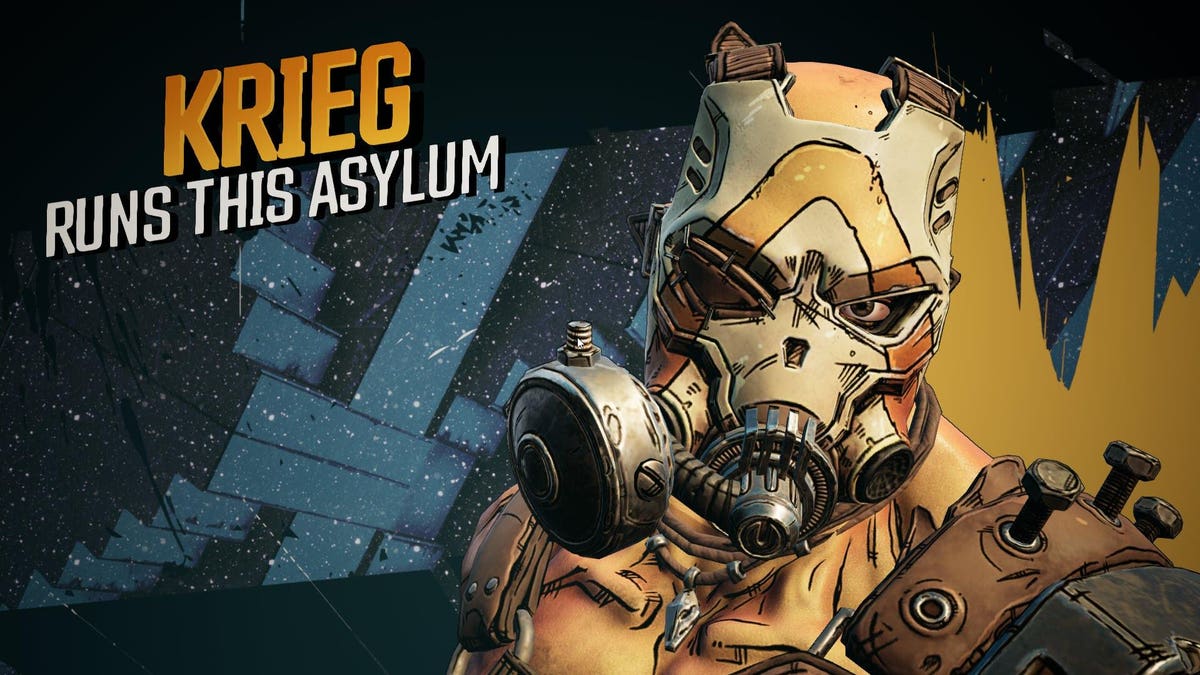 Given how long Borderlands 3 has been teasing this fourth (and possibly final) Krieg DLC, I figured it was some sort of grand finale before year 2 arrived, possibly larger and more in-depth than the three (very good) entries that came before it.

But while the storytelling of Psycho Krieg and the Fantastic Fustercluck is on point, I am somewhat disappointed by the final result, which feels like the smallest, shortest DLC yet that brings the least amount of new stuff to the table.

Psycho Krieg has us diving into the mind of our old friend, the Borderlands 2 DLC Psycho that ended up being a fan favorite character and falling in love with Maya. Krieg is torn between his sane and insane sides, but Tannis, overseeing this experiment, doesn’t really care much about that, but wants to learn why all Psychos are driven insane, and believes it’s because they know the location of a mystical, loot-filled place called “Vaulthalla.”

The DLC is divided up into three parts, one where Krieg faces his insecurities about being part of the Crimson Raiders team. Another where he deals with the loss of Maya. And the third is a “dark, scary place” where he doesn’t want to go that I will leave you to discover for yourself.

The story aspects, especially the first two parts, really work. The content channels Tiny Tina’s old DLC where she deals with the loss of her parents, and yes, the emotional payoff is there for those fans wondering how Krieg would deal with the loss of Maya (though I would argue that should have been the finale, not planted in the middle of the DLC).

The first area is the most interesting, a series of platforms made out of meat, bones and eyeballs that are suitably weird enough for this DLC concept. But the next two are just repurposed, disjointed geometry from other places we’ve already been.

The boss battles are…fine, but I hated one where you fight a train that disappears from view about 80% of the fight so it takes forever unless you can instantly burst it down. The grand finale is kind of a cool encounter, though on my first playthrough it was a bit of a slog fighting a level 67 final boss with mostly level 60 weapons, given that I hadn’t loot many new god rolls in the new five levels you get.

The five level cap increase is very weird. At this point, five skill points in each tree will do effectively very little and we have done all these skill trees to death at this point and they are not hiding any more surprised with another five points. All that does is outlevel your gear almost instantly (I hit 65 maybe halfway through the DLC), and you really only have an hour or so getting level 65 drops, so you’ll need a whole new set of guns for at least the third time in this game’s history. The exception to this was Moze, and because Iron Bear scales with player level, I didn’t need anything to start wrecking at level 65 Mayhem 10 because my current build didn’t require any new gear. It was a wildly different experience than when I played on Amara who now has to go back and farm her best gear all over again.

It is hard to get a handle on the DLC’s loot because I would say 99 times out of 100 new guns were not dropping when I played the DLC and only dropped from boss fights. I got a new shotgun that shoots out an echo projectile at enemies on kill which is cool, but it’s been hard to see the true power of any of the new weapons without farming for the “correct” anointments. But it seems like a big oversight that playing through the actual levels give you practically no new weapons at all, and it’s all old stuff. Again, this is not how past DLCs worked.

The DLC is short. Just those three sections and there are “side quests” that involve more or less just talking to sane and insane Krieg for a few minutes. Each section does have one extended side quest, and there was one I liked quite a lot where you feed a talking Tediore gun bullets and help them give birth to a new gun child. Exactly the kind of bizarre Borderlands humor you might like about the series. I also enjoyed insane Krieg’s constant stream of nonsense phrases that do actually kind of make sense if you stop to listen to many of them. He could have been annoying but he’s the highlight of the DLC.

There just isn’t a whole lot here compared to past entries. No new enemies, minimal loot drops across two completions, repurposed geometry to make new areas, five skill points instead of the rumored full fourth skill tree that should be coming later. I thought this would end up being one of the most substantial DLCs to date, but instead, I definitely think it’s the least. The writing is good, but everything else is somewhat lacking here.